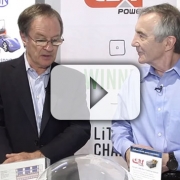 That GaN transistors outperform silicon-based solutions has never been more convincingly demonstrated than by CE+T’s Red Electrical Devils, who won first place in Google’s Little Box Challenge. At APEC 2016, Girvan Patterson, President of GaN Systems, describes to Design World / EEWorld’s Lee Teschler CE+T’s winning design of an uber-compact inverter using GaN transistors. The goal of the Google Little Box Challenge was to reach a power density in excess of 50 W/cubic inch in a maximum volume of 40 cubic inches – a feat which had never been achieved before.

CE+T’s Red Electrical Devils designed an inverter that produced a power density of 143 W/cubic inch in only 14 cubic inches, outperforming 2000 competitors, and exceeding the Little Box Challenge power density goal by nearly a factor of 3. According to Google, this power density “is 10 times more compact than commercially available inverters.” Adds Mr. Patterson, “Their design included novel approaches to the magnetics, the cooling, the ceramic capacitors they used and the amazing amount of innovation that create the power you get in that small space.”