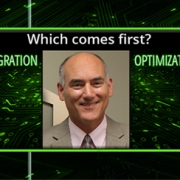 At APEC 2016 it became abundantly clear to the industry that GaN transistors are here, they’re now, and they’re proliferating. GaN Systems, EPC, Transphorm, Panasonic, Infineon, Texas Instruments, and other manufacturers and developers all displayed GaN products in varying readiness, from existing only on PowerPoint slides to actual customer production units. It’s been fascinating to watch the revolution-to-evolution over the past few years.

The message has changed over the years:

Also interesting to see this year, with the announcement of future products from Navitas, is that another company has joined GaN Systems and EPC in showing the integrated device capabilities of lateral GaN E-HEMT technology. The question is raised, however, “Is driver/FET integration in the future of GaN?” I say ‘YES”… and “NO.”

Consider the applications using GaN that were shown at APEC 2016: AC Travel Adapters, Lidar, Wireless Charging, Motor Drives, Inverters, Battery Chargers, DC/DC Converters, and more. There were dozens of applications using many topologies with GaN transistors of various voltage and current ratings. Add to that the dozens of semiconductor suppliers providing drivers. The driver functions include variations for single, dual, bridge and motor applications with varying features such as isolation, under voltage lockout (UVLO) points, slew rate and timing levels, enable pins, and more.

Companies around the world are taking these basic building blocks and finding the best new designs. Creativity is flourishing as nearly every month a new power density record is set, an efficiency barrier is smashed, or the smallest-ever system is built. These milestone designs need the freedom and flexibility of individual devices so they can be combined into the best systems possible. In the cases where a common design is confirmed by many companies as the best, standardization begins and integrated devices start to appear for these applications. Segments with varied solutions remain discrete. This ‘optimize, then integrate’ scenario played out in silicon in the past decades and the same will prove true with GaN.

One only has to search the Internet to get confirming data. Knowing that GaN transistors are replacing both MOSFETs and IGBTs, and taking a glance at Texas Instrument’s website, I found 159 different MOSFET and IGBT Driver ICs! Silicon Labs recently announced that their new isolated driver family Si87xx has 41 different options. FORTY ONE! So, with only a partial count of two of the leading driver suppliers, we have 200 distinctly different drivers in a power market that is decades old.

The value of integrating the driver function with the GaN transistor(s) is quite obvious to those seeking improved performance. The combination can deliver excellent control of the gate signal, minimum delays, slew rate control and protection functions, to name a few. It can also accommodate the drive voltage and current for the specific GaN transistor used.

So, “YES,” we will see integrated parts in GaN in the years to come in the segments that coalesce to one standard design. And, “NO,” a majority of the market needs to leverage the best of the many semiconductor companies and their drivers and their transistors to deliver power systems that vary widely in power levels, cost points, efficiency, topologies and markets. APEC 2016 showed the exciting variety of power system solutions the GaN revolution has created. I hope you’re coming along for the ride.