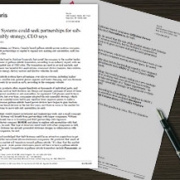 This article was originally published in Acuris.com. A small portion is available here and the rest can be read along with supporting graphics and charts in the PDF below.

Witham declined to disclose financials, but noted the company is the market leader in shipments of gallium nitride transistors, according to an industry report, with an overall market size of USD 10bn. The transistors are used in several markets, and the company has targeted five applications: consumer device chargers, data centers, renewable energy, factory motors and electric vehicles, he said.

Gallium nitride systems have advantages over silicon systems, including higher efficiency, smaller size, greater power capacity and faster charging, and can decrease product costs by as much as 20%, according to the company website.

Electronic products often require hundreds or thousands of individual parts, and companies, such as GaN Systems can design and engineer packages of some of these parts in power modules or sub-assemblies, he explained. Cell phones used to have 1,000 parts, but over time, companies adopted the sub-assembly strategy, which meant that manufacturers had to put together fewer separate pieces to make a phone. Because gallium nitride-based power devices have begun to gain traction over silicon-based devices in the last few years, and there is room in the market for GaN Systems to move into sub-assemblies, he said.