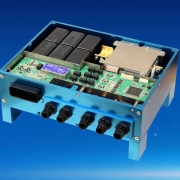 This article was originally published at Power Electronics News on May 12, 2020. Read the rest of the piece here.

GaN (Gallium Nitride) is experiencing surging interests across multiple segments of the electronics industry and gaining widespread acceptance because of efficiency and productivity improvements manufacturers expect from its use.

There’s a major shift happening in the performance of Power Electronics systems and it’s being driven by GaN transistors which are significantly faster and smaller than silicon MOSFETs and IGBTs. The performance of GaN shows that efficiency and power density have improved significantly, leading to system performance across several new applications that were not possible with yesterday’s silicon technology.

GaN transistors are significantly faster and smaller than silicon MOSFETs. The performance of GaN shows that efficiency and potential have improved significantly, leading to its use in several new applications that were not possible with silicon technology.

GaN’s superiority lies in its unique material and electronic properties, which make it attractive for electronic devices and optoelectronics applications. In addition to operating at high voltages and currents, GaN transistors have a switching capability 10 times faster than their silicon equivalents. GaN-based high electron mobility transistors have also shown an improvement factor of 10 in the energy density produced at microwave frequencies.

“We know that GaN can switch at very high frequency, so customers like to increase the frequency. Why do they do that? Because when you increase the switching frequency, the magnetics, and the capacitor get smaller. So typically, engineers will make the system operating frequency two times or four times higher, and that makes the capacitors and inductors be half the size, or one fourth the size. So they put all that together: lower losses means smaller cooling systems and the ability to switch at higher frequency reduces the size of the components. And that’s how they get those 4X smaller numbers,” said Jim Witham CEO at GaN Systems.

GaN has experienced a strong market explosion in 2020. Read the rest of the piece here.