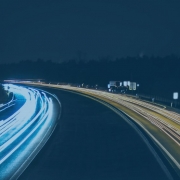 Part of The Mobility (R)Evolution series

By Jim Witham, CEO at GaN Systems, and Uwe Higgen, Managing Partner at BMW i Ventures

This is the third article within the series. Click here to read part 1, “The Transformative Forces of Electrification and Autonomous Driving”.

Growth in the availability and performances of charging stations is required to address the convenience concerns and ‘driving range angst’ that could gate the growth of EV and later AV adoption in both individual and shared or fleet uses.

One of the largest hindrances to EV adoption has historically been driving range angst.  Two technology areas are important in combating this. The first – battery power density and vehicle energy conversion efficiency – sits within the EV itself. The second area focuses on the need for an efficient and well-distributed network of charging stations that include a blend of both wired and eventually autonomous (wireless) solutions. Charging stations must achieve the same level of ‘emotional ubiquity’ that today’s drivers perceive for gas stations.

New infrastructure initiatives and partnerships are underway globally as the EV/AV mobility industry asks the question: “Who owns the new ‘gas’ station?”  Will it be retailers, energy companies, auto OEMs, cities, or new consortiums?  Current initiatives and experiments are diverse:

For EVs, residential and public wired chargers, as well as ultra high-speed chargers (170 mile range charges in 20-30 minutes) are needed as part of an easily accessible vehicle charging network. As AVs reach higher levels of autonomy, charging networks that are also autonomous will increase in importance for consumer adoption of shared or fleet services in particular. Longer term, vehicle charging will eventually disappear as a human task as a result of its eventual autonomous nature

Renewable energy is becoming the price competitive clean energy source for overnight residential or high-speed charging networks. Within the chargers themselves, photovoltaic inverters that are fast and efficient accompanied by dense electric storage systems will drive this change.

The stage is set for a massive hit to the global energy grid as the number of EVs grows from an estimated 2 million in 2017 to 125 million in 2035 – and even 500 million in 2040.  An increased focus on renewables must be a part of the mobility ecosystem to meet the level of demand resulting from this large number of vehicles – a demand that cannot sustainably be handled by traditional sources of electricity production. Plans must be made and acted upon around a global increase in renewables production and greater efficiencies in its storage, transport, and power conversion efficiency.

Real world constraints of weather (for solar and wind) and time of day (for solar), present a unique set of technology challenges for renewable energy in the form of needs for increased power storage density, network transmission efficiency, and the efficiency of conversion of electricity from chargers to vehicle batteries.

The role of GaN power semiconductors in renewable energy systems will reduce energy lost in conversion by 40-50%, provide efficiency gains in bidirectional (charging and discharging) systems, and enable the design of smaller and more power-dense storage systems with lower systems and installation costs.

In looking at EVs and the energy grid, there are considerations around micro and macro impacts that need to be a part of both public policy and industry technology development. Many developed markets may have adequate capacity to handle many years of EV growth, but at more regional, city, or neighborhood levels, this may not be the case. In areas dense with EVs, problems may arise in the energy distribution system at certain times of the day. Next generation systems will have to integrate software intelligence and new storage hardware to mitigate the impact on the grid.

Continue to the next article in the series, “The relationship between the growing data demands of autonomous vehicles and data centers’ move to greater energy efficiency”>>