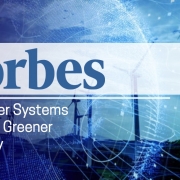 This article was originally published on Forbes.com on January 25, 2019 by Wal van Lierop, Forbes Contributor.

How do we reduce CO2 emissions quickly without throttling the global economy? Discussions about climate change inevitably return to this question. For a genuinely satisfying answer, I offer this conversation with Jim Witham, CEO of GaN Systems.

GaN Systems (a Chrysalix portfolio company) works in a largely unknown part of the global energy transition. Their power transistors cut the size, weight and power losses of power electronics systems by fourfold. The secret sauce is a gallium nitride (GaN) layer built into their devices.

Jim, a veteran of the semiconductor industry, joined GaN Systems in 2014 and has led the company’s entry into datacenters, electric vehicles, renewable energy systems and other pillars of the carbon-free economy. We discuss how a seemingly little innovation, like better transistors, can produce massive energy savings.

Wal van Lierop: Jim, tell us about the origins of GaN Systems. Who founded the company and why?

Jim Witham: The power electronics industry has known about gallium nitride (GaN) for a long time. The material has outstanding performance parameters, but the key was to make it reliable. That happened in Ottawa, where an interesting cocktail of ingredients were mixed together ten years ago.

The first ingredient was Ottawa’s entrepreneurial spirit. Some people call it “Telecom Valley” because companies like Nortel Networks and Newbridge Networks were founded there. John Roberts and Girvan Patterson, the founders of GaN Systems, came from that heritage and had started multiple companies.

The second ingredient was deep GaN experience in Ottawa. Nortel Networks had done its own GaN work and many of our design engineers cut their teeth on GaN there.

The final ingredient in the cocktail is that Ottawa has a national research laboratory with a GaN fab where people can make devices in fast learning cycles. There’s no need to ship designs overseas and wait weeks to get prototypes back. That fact resulted in GaN Systems producing the first reliable GaN transistors.

Wal: What is a GaN transistor, and what should the public understand about it? 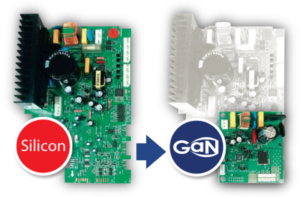 Wal: Why are GaN transistors better than traditional power transistors?

Jim: The performance parameters of that GaN layer allow power systems to be smaller, lighter and more efficient than older systems. They cut the size, weight and power losses by 75%.

Wal: Can you give an example of how GaN devices lead to more sustainable products?

Jim: We operate in four main industries: consumer, industrial, automotive and datacenters. For a large datacenter company that provides major internet services, we’ve calculated that GaN chips would lower their annual energy bill across all their datacenters by $471 million and avoid capital expenditures for new data centers to the tune of $1.1 billion. By introducing GaN transistors into their server racks, datacenter companies could rake up an additional $1.4 billion in annual revenue.

Wal: That is fantastic, so better power electronics can play a significant role in reducing emissions.

Jim: Yes, but there are two elements in reducing emissions. The first is to generate less carbon dioxide and the second is to waste less electrical power.

Let’s take the automotive industry, a main contributor of CO2. The transition from the internal combustion engine to electric vehicles is underway. However, if we make electricity for EVs by burning oil and gas, we merely shift the CO2problem from transportation to the energy grid. We need to drive EVs, generate more renewable energy and waste less power.

GaN has a magnifying effect on each of these issues. It makes EVs four times more efficient with power. In vehicles, GaN enables smaller electrical systems, which brings down weight and means vehicle makers use less of materials like copper and aluminum, which are energy-intensive. In renewable energy systems, GaN enables us to reduce electrical losses due to heat by 75%, which means that more of the energy we generate goes to the end use. Introducing GaN transistors throughout the chain reduces emissions, waste and cost.

Wal: Besides GaN transistors, what are other promising projects to improve energy efficiency and reduce emissions?

Wal: If the switch to 48-volt system saves that much power, why wasn’t it done sooner?

Jim: When the 12-volt servers were put in place, datacenters consumed a fraction of 1% of global energy. Now that datacenters have creeped up to 3% of global energy and could reach 5 to 10% in the next decade, everybody wants to do something about it. Google, for example, uses 100% renewable energy in its datacenters and that’s a good step. Making efficient power electronics is a step beyond that.

Wal: Most entrepreneurs have learned stories of Silicon Valley startups, but they rarely hear about industrial innovators like GaN Systems. What advice would you offer founders in this relatively unloved space?

Jim: Industrial innovators tend to focus on two related issues. One is how to use our natural resources efficiently so that seven billion people can flourish on this planet. The other is climate change and CO2 emissions.

Businesses make decisions based on financial metrics, but they also want to improve society. As an innovator, if you can address the bottom line, then you can make it easy for businesses to embrace changes that will serve the climate and resource conversation.

So first, focus on solving problems related to the two big issues. If you do that, good things happen. Second, pay attention to the message. You need to elevate a message to business executives, not just engineers. Speak in dollars, Euros and RMB. Speak to the CFO and the CEO. Beyond that, here’s my message to entrepreneurs: If you want to take on the greatest challenges humanity has ever faced, go into industrial innovation. Your work in this field could make a big difference for future generations.