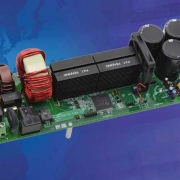 This article was originally posted on Data Center Frontier on June 28, 2018 by Bill Kleyman.

The data center is an ever-changing part of the world of digital business. In periods of innovation, sometimes we need to look under the hood to really see some big changes in the data center.

As density increases and our requirements around power continue to grow, how do current power system keep up? Just as shrinking chips and processes are providing more processing capabilities, power solutions will need to follow suit.

One of the solutions getting a look is the use of Gallium nitride (GaN) in power conversion equipment, which some believe has the potential to bring greater efficiency to data center power distribution. GaN has been around for a while, but it’s early days for the technology in the data center. A number of companies are working to advance GaN and develop commercial products that can compete with traditional silicon-based transistors.

In examining the potential relevance of GaN for the data center industry, it’s useful to look at some history.

The Rise of the Transistor

In the late 1950s, transistors gained widespread use because they could be used in many different kind of applications. They were small and efficient, and rapidly displaced the vacuum tube technologies that had been prevalent at the time.

Over the course of the 1970s and 1980s, we saw a massive rise in silicon transistor capabilities. This was when we started to see more integrated circuits, earlier iterations of compute technologies, and more electronics in general impacting consumer and business life. When it came to power conversion, the silicon-based metal-oxide-semiconductor field-effect transistor (MOSFET) was at the center of it all.

Fast forward to 2018, and we’re approaching the technical limitations of silicon for power conversion. Performance gains are slowing, and its becoming more difficult to drive down cost. That’s why new solutions are being explored that can revolutionize the way power is delivered.

This brings us to gallium nitride (GaN), a material that’s actually been around since the 1990’s. However, research into semiconductor integration actually began in the 1960s. You know LEDs? GaN was used as a key component in that technology.

Today GaN is being used in the production of semiconductor power devices as well as RF radio components. When it comes to data center and power efficiency, GaN has demonstrated the capability to be the disruptive technology for silicon semiconductors in solutions which provide power conversion.

An Alternative to MOSFETs

In 2010 the first enhancement-mode gallium nitride transistors became generally available. Why is this important? These devices are designed to replace power MOSFETs in applications where switching speed or power conversion efficiency is critical.

GaN solutions have the opportunity to impact a number of industries. This includes telecom, industrial, automotive, and even renewable energy. In the case of renewables, GaN has the capability to reduce energy losses by up to 40 to 50 percent, with a significantly smaller and lighter PV inverter. Beyond that, GaN offers some seriously benefits over silicon, including faster switching speeds, pretty much no electrical resistance, less capacitance and lower costs to deploy.

I’m not saying that you should throw out your power supplies and go for GaN. However, you should realize that there are already real-world applications around GaN solutions in the data center. In fact, some have already been deployed.

“Bel Power’s legacy of leading the global power management industry is built on responsible innovation that empowers our customers,” said Alain Chapuis, CTO of Bel Power Solutions. “The TET3000 is a result of that commitment. After considerable R&D weighing various semiconductor materials and power system designs, Transphorm’s GaN within a totem-pole PFC configuration proved the most reliable, highest performing solution possible today. In turn, our customers gain access to a next generation power supply that stands to outperform incumbent solutions while delivering a greater ROI.”

Transphorm and Bel Power aren’t alone in pursuing the development of GaN for use in servers and IT installations. Other vendors targeting this niche include GAN Systems and Efficient Power Conversion, which each offer products for data center operators.

As with everything in technology, we’re always looking for the next big thing. For power conversion, GaN solutions may very well be that vehicle. For now, it is still a relatively newer technology and adoption is limited but certainly growing. This is impacting both the consumer and enterprise power spaces.

If you’re seeing power density, cost, and space as real issues, it’s not going to get easier any time soon. My biggest recommendation is to take a strategic approach to data center power design and be prepared for what future requirements might bring. That could include being conversant in the GaN solutions and their ability to help you manage power, density, and new requirements around your data center.