Gallium nitride (GaN) is creating an innovative shift throughout the power electronics world. For decades, silicon-based MOSFETs (Metal Oxide Semiconductor Field Effect Transistors) have been an integral part of the everyday modern world that helps convert energy to power. However, we are reaching the theoretical limit on how much silicon MOSFETs can be improved, how power-efficient they can be. With increasing power density and efficiency requirements and environmental pollution regulations trends, silicon is failing to meet these modern demands.

Gallium nitride is on the rise to replace silicon as the backbone of power switching technology as it can meet the growing needs with better power systems efficiency, performance and system cost.

WHAT IS GALLIUM NITRIDE?

Gallium Nitride is a binary III/V direct bandgap semiconductor that is well-suited for high-power transistors capable of operating at high temperatures. Since the 1990s, it has been used commonly in light emitting diodes (LED). Gallium nitride gives off a blue light used for disc-reading in Blu-ray. Additionally, gallium nitride is used in semiconductor power devices, RF components, lasers, and photonics. In the future, we will see GaN in sensor technology.

In 2006, enhancement-mode GaN transistors, sometimes referred to as GaN FETs, started being manufactured by growing a thin layer of GaN on the AIN layer of a standard silicon wafer using metal organic chemical vapor deposition (MOCVD). The AIN layer acts as a buffer between the substrate and GaN.
This new process enabled gallium nitride transistors to be producible in the same existing factories as silicon, using almost the same manufacturing processes. By using a known process, this allows for similar, low manufacturing costs and reduces the barrier to adoption for smaller transistors with much improved performance.

To further explain, all semiconductor materials have what is called a bandgap. This is an energy range in a solid where no electrons can exist. Simply put, a bandgap is related to how well a solid material can conduct electricity. Gallium nitride has a 3.4 eV bandgap, compared to silicon’s 1.12 eV bandgap. Gallium nitride’s wider band gap means it can sustain higher voltages and higher temperatures than silicon MOSFETs. This wide bandgap enables gallium nitride to be applied to optoelectronic high-power and high-frequency devices.

The ability to operate at much higher temperatures and voltages than gallium arsenide (GaAs) transistors also makes gallium nitride ideal power amplifiers for microwave and terahertz (ThZ) devices, such as imaging and sensing, the future market mentioned above 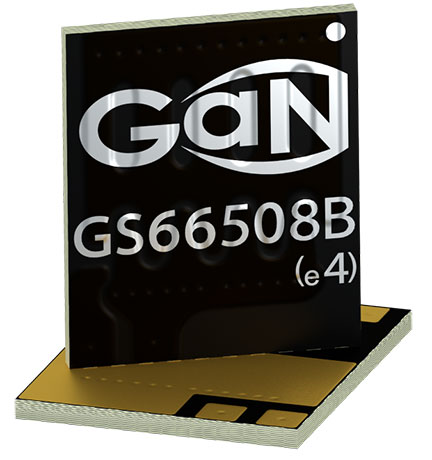 View our full line of transistors >

THE MAJOR OF ADVANTAGES OF GAN:

GaN semiconductors have the capability to operate at higher voltages, temperatures and switching frequencies with greater efficiencies compared to existing Si devices. These characteristics not only result in less losses but enables significantly reduced system volume, due to decreased cooling requirements and smaller passive components contributing to overall lower system costs,

GaN Systems’ approach to a new generation of GaN power transistors is leading an industry-changing shift in both the short-term and ‘near future’ relationship between technology’s power systems and energy–creating significant product and system-wide changes.